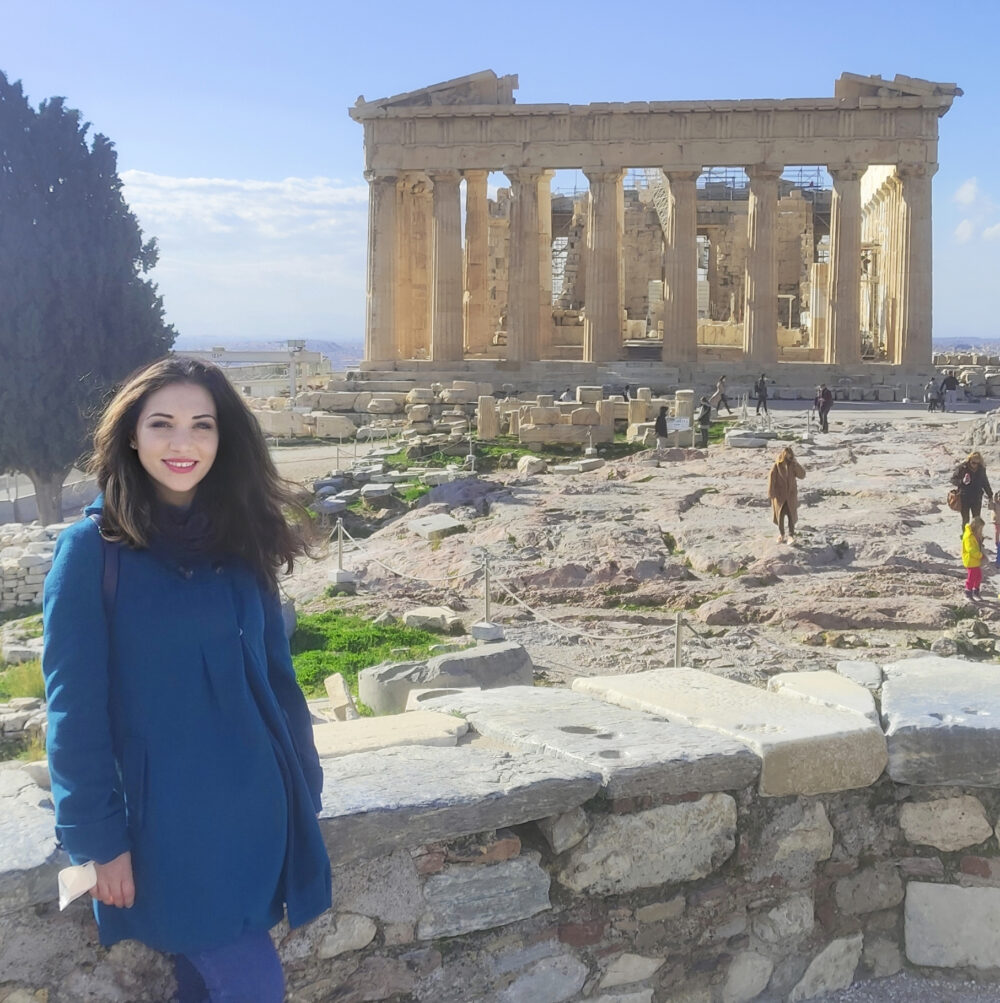 Nestled in the heart of Toledo (Spain) lies a hidden jewel that holds a wealth of history and culture: the Synagogue of Santa María la Blanca. This stunning 12th-century structure is a testament to the fusing of Jewish and Islamic architectural styles, reflecting the city’s rich cultural heritage.

Built by Jewish artisans heavily influenced by both the Almoravid and Almohad dynasties, the Synagogue is a true masterpiece of Mudéjar design. The turbulent story of its conversion into a church during the Spanish Inquisition and its current role as a museum make visiting it a unique and unforgettable historical experience.

The origins of the stunning Synagogue of Santa María la Blanca can be traced back to the late 12th and early 13th centuries, during the reign of King Alfonso VIII. At the time, the Jewish community of Toledo enjoyed a privileged status, thanks in part to the King’s close relationship with prominent Jewish figures like his physician Todros ben Judah and his chief lender Joseph ibn Salomón ibn Shoshan. The legend of the King’s love affair with a Jewish woman, Fermosa, connects with this close relationship. Nevertheless, this love story remains a myth that most modern scholars don’t consider historically accurate.

This prosperity is reflected in the grandeur of the Synagogue, constructed using the finest materials and decorated with intricate Mudéjar designs. However, this privileged status did not last for long. In the 15th century, during the Spanish Inquisition, the Synagogue was transformed into a church. The Catholic Monarchs, Isabel & Ferdinand, issued an edict in 1492 ordering all Jews to convert to Christianity or leave the country. As a result, many synagogues were seized by the Catholic state and converted into churches. This Synagogue was among them and received the name of “Santa María la Blanca” in honor of the Virgin Mary.

This process of conversion (known as “limpieza de sangre” or “cleanliness of blood“) was an attempt to eliminate any Jewish or Muslim influence in Spain. Fortunately, this endeavor was not successful in the end, as the legacy of these cultures still forms a big part of Spanish architecture, art, and culture to this day.

Despite the change in its purpose and name, the Synagogue remains a unique architectural masterpiece, showcasing the skill and creativity of the artisans who built it. Its history reflects the complex and diverse history of the country and serves as an important reminder of the cultural and religious diversity that once flourished in Toledo.

The Synagogue of Santa María la Blanca stands out for its unique architectural design, which is distinct from that of the churches and mosques in the city. Its construction and decoration are a testament to the blending of different cultures and their rich history together.

This unique orientation is not just a coincidence but rather a deliberate choice made by the Jewish artisans who built the Synagogue. According to some scholars, the north-facing entrance was intended as a symbolic differentiation from Toledo’s dominant Christian and Muslim cultures. It served as a statement of the Jewish community’s independence and autonomy.

Others suggest that the north-facing entrance was chosen for practical reasons. The natural light that enters the Synagogue through the north-facing windows creates a soft and diffuse illumination, which was ideal for the religious rituals that took place inside. This orientation also provided a sense of privacy and seclusion for the Jewish community, as the Synagogue was not visible from the main streets of Toledo.

The disruptive architectural style of a Toledan Synagogue

The Synagogue of Santa María la Blanca in Toledo also stands out for its unique architectural style. A singular example of Mudéjar architecture, a technique that blends Islamic and Christian influences.

Its plant showcases five naves and a flat ceiling, both characteristics typical of mosques. This unconventional layout breaks with the traditional architectural display of churches and chapels in Toledo.

A disruptive architectural style resulted from the Almohad influence during the late 12th and early 13th century. The Almohads, a Berber dynasty that ruled over much of North Africa and Al-Andalus, brought their clean aesthetic to Toledo, particularly in the form of ornate plasterwork. This influence is evident in the Synagogue’s smooth, polished surfaces, punctuated by geometrical designs.

The choice of construction materials for Santa María la Blanca

The Synagogue of Santa María la Blanca in Toledo is a true architectural wonder, with a unique blend of different styles, also reflected in the choice of materials.

The use of baked clay and plaster, characteristic of the Almoravid and Almohad architectural traditions, gives the Synagogue a sense of elegance and refinement. The surfaces are smooth and polished, creating a unique aesthetic that sets it apart from other buildings in Toledo.

In addition to these materials, the builders also incorporated stone, particularly in the construction of arches, following Cordoban architectural style. The horseshoe arches that span the nave show the Jewish builders of Santa María la Blanca were well-versed in the architectural styles of their Islamic counterparts.

However, the octagonal pillars that sustain these arches are an original option. They differ from the Cordoban architecture, which still adhered to Visigothic traditions. Despite certain Almoravid nuances, the supports are highly original. Their design would eventually become prevalent in Toledo’s Mudéjar architecture, especially in the patios of the 15th century, such as in the Palace of Fuensalida and the Palace of the Dávalos.

The walls of Santa María la Blanca are adorned with intricate and striking geometric patterns, a clear indication of the influence of the Almohad dynasty. The simplicity of these designs, emphasizing clean lines and shapes, reflects the Almohads’ rejection of luxury and excess.

One of the most striking features of the Synagogue are its carved stucco capitals, a synthesis of Hispano-Muslim art with possible Coptic influences. These capitals introduce evolved and adapted designs inspired by the Corinthian style. Each of them is divided into a series of diamonds (rhombuses) by a sebka, a sculptural network of oriental origin.

The background of each diamond is covered with palmette leaves, a motif traced back to the classical acanthus leaf, commonly used in the 10th century Caliphal art. Underneath each volute, we find a “pine”, another design element widely used in Toledo’s Mudéjar architecture from the 13th century.

These pines are made of plaster and are particularly striking, with deeply incised surfaces for an effect of overlapping. The pronounced relief of these designs is a departure from the flatness typical of Almohad art of the time, showcasing the creativity of the Toledo craftsmen.

The decoration of Santa Maria la Blanca synagogue is notable for its geometric patterns and motifs, which demonstrate Almohad influence. This style, characterized by clean lines and shapes, was championed by the dynasty and is a departure from the more ornate decoration previously seen in Andalusian and Mudéjar art.

The octagonal pillars of the Synagogue support a double arcade. The first level features simple horseshoe arches, while the second is decorated with smaller and more intricate lobed arches. These are similar to the maqsura of the Great Mosque of Córdoba, a major reference for all the architecture of that time in the Iberian Peninsula.

The area between the two levels is adorned with what scholars call “ancha”, an intricate plaster relief sculpture that interweaves simple geometric motifs. However, these patterns are more complex than those used in the Almoravid period and are a precursor to the more elaborate geometric decoration in Toledo’s synagogues of the 14th century.

Furthermore, the spaces between the arches of the first level include circular medallions, also decorated with geometric patterns similar to those found in the Ulu Cami in Divrigi, Turkey, dating back to the Seljuk dynasty of the 12th and 13th centuries.

This kind of stucco work in the Synagogue illustrates the close artistic ties between different Islamic regions. It also indicates that the craftsmen were aware of new artistic innovations and incorporated them into their own constructive tradition.

Concluding the visit to the Synagogue of Santa María la Blanca, in Toledo

In conclusion, the Synagogue of Santa María la Blanca is a true architectural masterpiece that showcases the skill and creativity of the Jewish community who built it. It also serves as a reminder of the complex and diverse Spanish history and the cultural blend that once flourished in Toledo.

Built in the 12th and 13th centuries as a synagogue, it was turned into a church during the Spanish Inquisition in the 15th century. Today, it is open to the public and functions as a museum and cultural center.

Despite the changes in its purpose and name, the Synagogue remains a testament to the city’s rich cultural heritage and a symbol of the Jewish community’s resilience and perseverance in facing adversity. Therefore, a must-see for anyone eager to learn more about the history and culture of Spain. And also a powerful reminder of how important it is to preserve and celebrate diversity.

A Toledo Day Trip from Madrid (10 wonderful things to see, do and taste)